We’ve become used to tech demos that are simple and clear, but some go-to-market missions using a different class of payloads require a more complex approach than standard cubesats. They include radars and hybrid or infrared sensor
Some of these applications require more extreme engineering, even on the first mission. They also need more testing and validation even before entering the commercial state. Many things can go wrong the first time around, and the number of innovative subsystems for a single satellite is much higher than on a regular cubesat mission.
Precious Payload’s goal is to give engineering teams working on the most complex space projects the tools they need to complete their mission in a reasonable amount of time and for less money.

Got actionable feedback in under 20 days

In less than a month, Precious Payload was able to collect actionable information to make a “go/no-go” decision based on the feedback of actual suppliers.

Space Ninja could have done this themselves, but they just didn’t have the time. And this is the main value of our services: The client invested fewer than 10 hours of engineering time to set up mission requirements, respond to questions on the platform, and get feedback from 20 suppliers in under 30 days. This is virtually unheard of in the industry. 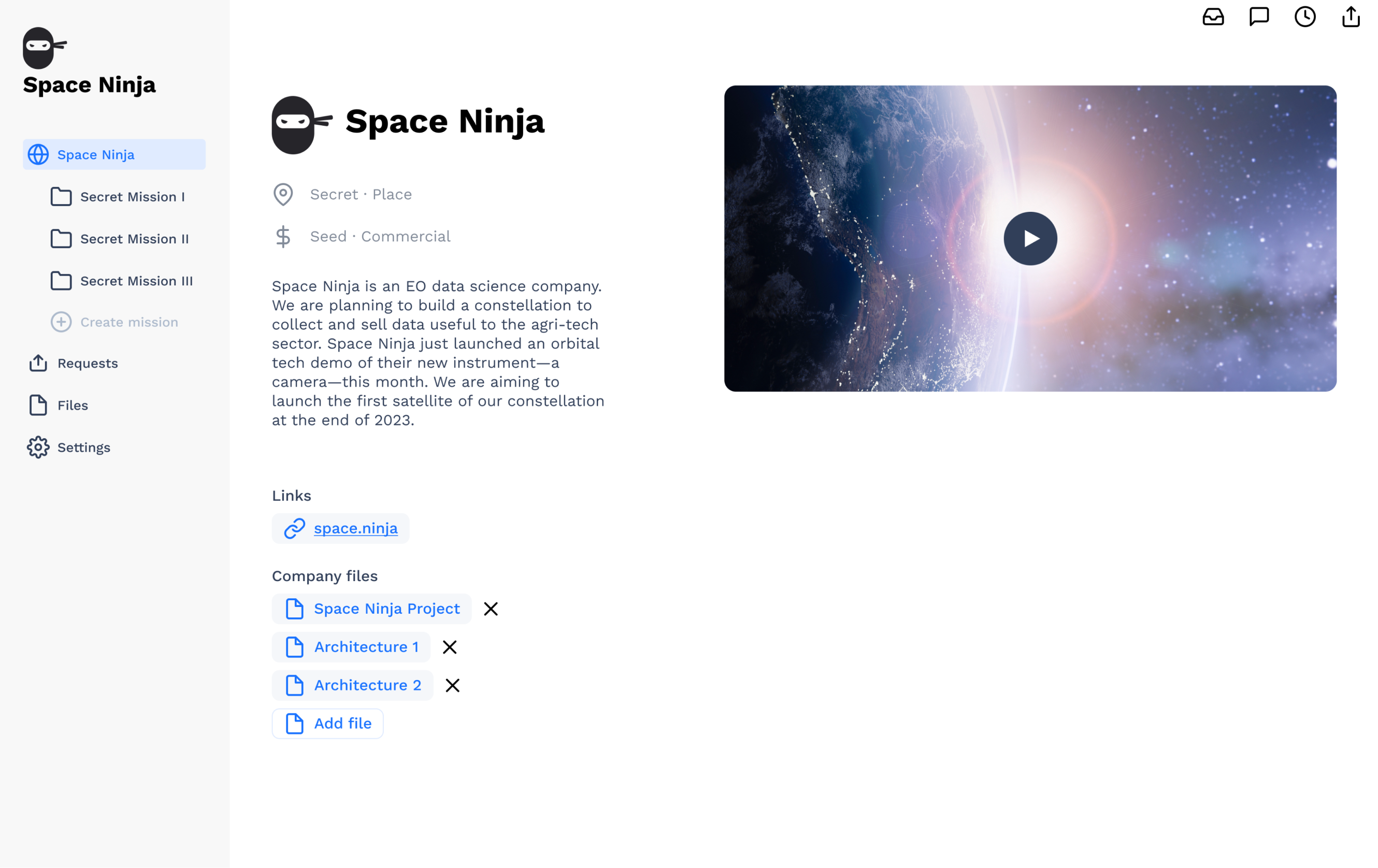 ABOUT THE CLIENT’S COMPANY:

A data science company in stealth mode (*let’s call them “Space Ninja” for now) came to us with a complex Earth Observation mission for the agri-tech sector and climate change research. They had already made a subscale validation and had planned a bigger commercial mission with the goal of being operational within 36 months.

The company recently launched an orbital tech demo of their new instrument—an infrared camera. They are aiming to launch the first satellite in their constellation at the end of 2023.
Getting an infrared sensor to the operational state ideally requires multiple in-orbit demonstrations. They are used to precisely record temperatures, but the data can be polluted by heat from the instrument itself, and from the satellite. Several complex solutions to this problem include inefficient radiators and sun shields like the one used on the James Webb Telescope, but getting these subsystems to work takes a lot of engineering time.

Space Ninja’s specific challenge was moving from a subscale in-orbit demonstration to a fully developed small satellite. The thing is, in order to achieve mission success, a vast number of subsystems need to be integrated for the first time, and they should all work perfectly together.

• The client had limited time, a successful subscale technical demonstration, and a planned large mission with a very big risk profile of individual subsystems.
• The mission budget is over $10 million, and Space Ninja needed to mitigate the risks of validating all of these subsystems without wasting time or money.
The idea was to study the mission feasibility of an intermediate testing mission. This would allow them to check technology not used in the demo mission and fine-tune it for the expensive 200 kg satellite. But even testing the feasibility of such an intermediate mission takes hundreds of hours, and is very complex because of the unpredictable lead times for different suppliers.

They came to Precious Payload with a task to find out if they can afford to squeeze this mission into their timeline, between the tech demo and the big satellite launch.

We drastically reduced the number of engineering hours for the mission

We consolidated communications and finished the research in record time

Together with our mission managers, we created a mission design for the intermediate technical demonstration. This allowed us to quickly study the feasibility of the mission within the constraints of time and budget to maximize the validation and reduce the risks of individual subsystems.
We also built Data Rooms for all missions to demonstrate continuity and show potential partners it’s not Space Ninja’s first mission. Given that time was a constraint for both parties—the suppliers and the customer—it was crucial to show providers that Space Ninja had real-world experience. 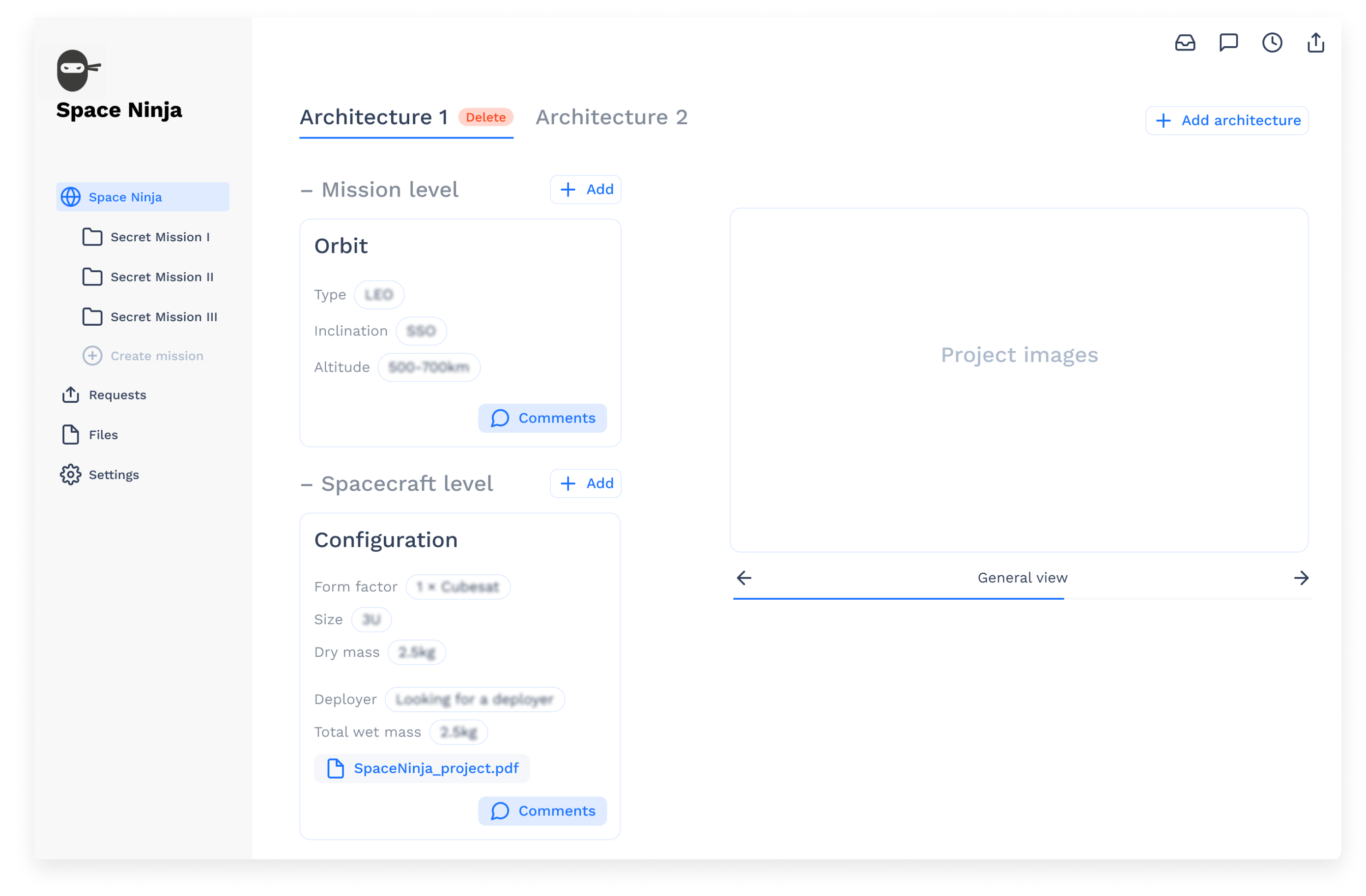 FEATURES OF OUR INNOVATIVE SOFTWARE:

• Allows for quick mission profile creation and iteration of space mission designs
• Identifies potential suppliers for a given mission feasibility study
• Provides rapid feedback from the suppliers using the payload data room
• Empowers engineers with actionable data to make go/no go decisions for the mission.
The Earth Observation market is growing fast. If you have developed a new technology that can revolutionize satellites applications, talk to us today. We will help test this technology as soon as possible and guide you through the decision-making process so that you can plan your future missions with confidence.
Book a demo